A REPORTER AT LARGE
A story of love, revolution, and betrayal. 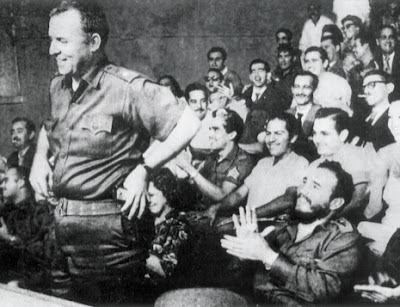 Have surprise—married yesterday 12:30 am to Darlene Edgerton. Am happy—will write or call soon as possible. Don’t worry or get excited.

Why do I fight here in this land so foreign to my own? Why did I come here far from my home and family? Why do I worry about these men here in the mountains with me? Is it because they were all close friends of mine? No! When I came here they were strangers to me I could not speak their language or understand their problems. Is it because I seek adventure? No here there is no adventure only the ever existent problems of survive. So why am I here? I am here because I believe that the most important thing for free men to do is to protect the freedom of others. I am here so that my son when he is grown will not have to fight or die in a land not his own, because one man or group of men try to take his liberty from him I am here because I believe that free men should take up arms and stand together and fight and destroy the groups and forces that want to take the rights of people away.

The most efficient accident . . . is a fall of 75 feet or more onto a hard surface. Elevator shafts, stair wells, unscreened windows and bridges will serve. . . . The act may be executed by sudden, vigorous [lifting] of the ankles, tipping the subject over the edge. If the subject is deliberately run down, very exact timing is necessary and investigation is likely to be thorough. . . . The subject may be stunned or drugged and then placed in the car, but this is only reliable when the car can be run off a high cliff or into deep water without observation.

When I saw you last you were just a little tyke. . . . You use to sit in the window and when you saw my car drive in you would say—Daddy Daddy. . . . And I know when I did not come home any more I know you missed me and looked out the window for your dad—this was a long time ago baby and possibly you don’t remember—but I do—And always will.

Foto: William Alexander Morgan being applauded by Fidel Castro, in Havana in 1959. Morgan said that he had joined the Cuban Revolution because “the most important thing for free men to do is to protect the freedom of others.”
Posted by Claudio Ferrufino-Coqueugniot at 7:12 AM No comments: